skip to main | skip to sidebar

POET, Louise Landes Levi due to read December 8, 2007 at the Hooker-Duhnam Theater 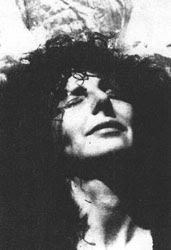 Here are a few recent online resources for the work of Louise Landes Levi who is scheduled to read at the Hooker-Duhnam Theater on December 8 at 7:00 PM.

The vocabularies of Prayer include an entire range of human expression, dance, design, dramaturgy, art, architecture &, of course the spoken word. Preserved since antiquity, the metaphysical & aesthetic qualities in Indian Dance , Tibetan Sand Paintings, Islamic calligraphy seem as vital to us now as they were 1000 years ago.

As poet & translator my preoccupation or 'dharma' has been with the spoken & written word. Experience in esoteric schools of learning attuned me , in particular, to the vocabularies & methods of 'transmission'. The resonance of prayer in ancient tongue 'Hebrew resonated through my childhood imbuing it with a sense of the primordial.

I hope the following article will serve to illustrate what I feel to be the inner, outer & secret methods of prayer & the way esoteric & esoteric culture maintain our human link to the non-dual or contemplative state.

The Highway Queen with an interview 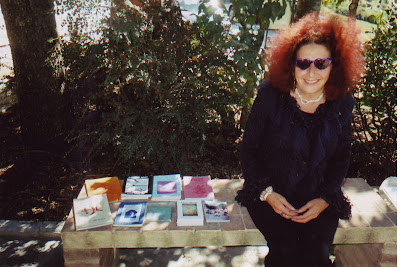 To read my article about Louise in Italy (photo above) go to my personal blog, Poetrymind.

Overland journeys to India produced several interpretive translations/ one of Rene Daumal ( the great Sanskrit autodidact & author of well known Mt. Analogue) RASA originally printed by New Directions (1982), now available through Siva Stan, the other, of the legendary poet genius Mira Bai whose devotion to Krishna freed her entirely. SWEET ON MY LIPS was published by Cool Grove Press in 1997 & reprinted in 2003 w. an introductory essay by La Monte Young.

In a strange twist of fate, much of Ms. Levi’s own work was thrown away by a concierge (or divine agent) in Paris, 1977. Henri Michaux, known for his eremitism & anonymity, nurtured our author through this crisis. A generous selection of LLL’s translation from HM, plus an essay on her meeting with him can be found on line at www.milkmag.com. Forthcoming fr. Coronamundi, a large selection of the work. Towards Totality, 2005.

LLL is known to be peripatetic & shy. Please contact her for any publications that are as difficult to find as she is at: levitate108@hotmail.com

Since 1992 she has directed Il Bagatto Books, printing occasional chapbooks, broadsides & postcards. The press originated in Arcidosso, Italy & travels w. her. It is co-sponsored by Ms. Sofia Bentinck.

On Sweet on my Lips

"Mirabai's spiritual vision and poetic genius shine through these pages. Verses of wounded pathos and soaring ecstasy are rendered here as vividly as if they had been spoken yesterday, yet with the incantatory power of sacred text. Levi's translations, brilliant in their lucidity, usher the reader directly into the heart of Mira's rare, impassioned devotion."
-Miranda Shaw. Author of Passionate Enlightenment.

"The West has St. Teresa d'Avila - the East has Mirabai. Whosoever understands them both understands all there is to understand."
- Claudio Rugafiori

"These poems of Mirabai have been beautifully translated from the Middle Hindi by Louise Landes Levi, and they should serve as a fine key to this tantric poet's consciousness. "
-Lawrence Ferlinghetti

"What makes these translations of Mirabai so remarkable is not so much this simpatico recognition among poets across time and space, but that for the first time these poems are rendered in the context of their original transmissions by one who is herself an initiate, tantric practitioner, and acarya of poetics. "
-Jacqueline Gens, extracted from The Mirror

"Louise Landes Levi's Guru Punk is sex in the city light years delivered from tv usa's yuppie mortification. the fast breath of punk and the endless flow of buddha. like passing beauty in the subway. it's there, it's gone, it's there again."
-Thurston Moore, Sonic Youth
Posted by BCLA at 9:27 PM